Amazing soprano Awet Andemicael performs some of the most beautiful Alleluias ever written by Vivaldi and Mozart paired with the dazzling sounds of Corelli’s Concerto Grosso in D major and Haydn’s spritely and energetic Thirtieth Symphony “Alleluia.” A joyful and jubilant start to the holiday season.

Join us after the concert for Coda Conversations. 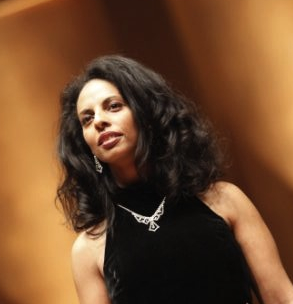 Awet is delighted to be making her debut with the Illinois Symphony. Other performances this season include a concert of Baroque arias with the Orlando Philharmonic and Messiah with the Charleston Symphony.

Awet has sung across the United States, as well as in Europe, Asia, and Africa. Highlights include performances with the Boston Symphony, San Francisco Symphony, Los Angeles Philharmonic, and the Knights at the Tanglewood Festival and the BRIC (Brooklyn) Festival, in the role of El Trujamán in De Falla’s El Retablo de Maese Pedro.

Awet’s special affinity for eighteenth-century sacred music has been featured in concerts with the Bach Collegium Japan, the Handel and Haydn Society, at Carnegie Hall and the Ravinia and Aldeburgh Festivals, with the Symphonies of Pittsburgh, Nashville, Jacksonville, Richmond, and Memphis. Recent performances include sacred Baroque arias with the Charleston Symphony, Messiah with the Colorado Bach Ensemble and the Charlotte Master Chorale, Mozart’s Requiem with the Charleston Symphony, and the world premiere of Bernard Gilmore’s oratorio “Journey to Freedom.” Awet has also sung at academic conferences and symposia, including events sponsored by the Center of Theological Inquiry (Princeton, NJ), the Calvin Institute of Christian Worship (Grand Rapids, MI), Durham University (UK), the Yale Center for British Art, and Duke Divinity School.

Her discography includes Folia, an album of Baroque music recorded with the Sebastians Chamber Ensemble, as well as recordings with the Etherea Vocal Ensemble, the Paragon Ragtime Orchestra, and the Harvard University Choir. Awet’s voice was also featured in the Warner Brothers film Miss Congeniality, singing an excerpt from Mozart’s Die Zauberflöte.

In addition to her work as a musician, Awet is a theological scholar, serving most recently as a lecturer at the Yale Institute of Sacred Music and Divinity School. She has published several articles and book chapters on theological topics, as well as a UNHCR study on artistic activity in refugee camps. Currently a PhD candidate in theology at Yale University, Awet holds degrees from Harvard University, Yale Divinity School and Institute of Sacred Music, UC Irvine, and the University of Notre Dame.