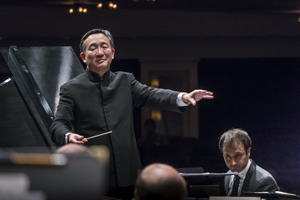 In 2011 Ken won the Memphis Symphony Orchestra International Conducting Competition and was a featured conductor in the League of American Orchestra’s 2009 Bruno Walter National Conductors Preview with the Nashville Symphony. He made his US professional debut with the National Symphony Orchestra at the Kennedy Center in June 2008 as one of four conductors selected by Leonard Slatkin. In recent seasons he led performances with the symphony orchestras of Cincinnati and Cincinnati Pops, Baltimore, Detroit, Memphis, Illinois and Meridian, as well as the Hong Kong Sinfonietta, Hong Kong Philharmonic, Guiyang Symphony and the Taipei Symphony Orchestra.

In opera, he directed numerous productions of the Janiec Opera Company at Brevard and was Assistant Conductor at Cincinnati Opera, Baltimore Lyric Opera and at the Castleton Festival. In recent seasons, he led critically acclaimed productions at the Spoleto Festival USA, Lincoln Center Festival, and the Luminato Festival in Canada, and his run of Massenet’s Manon at Peabody Conservatory was hailed by the Baltimore Sun as a top ten classical event in the Washington D.C/Baltimore area in 2010.

He read economics at St. John’s College, Cambridge University and was an attorney specializing in international finance for ten years before becoming a conductor.